Before the founding of New Singapore in 1819 the whole island was fully covered by dense lowland tropical forest with mangrove and freshwater swamp forest. Within the center of Singapore islands were sections of rainforest and large mangroves swamps that can be seen along the coast. At present, primary forest and secondary forest covers only 28.6 sq. km of land area.

The urbanization of the country and the increase of settlers resulted in the deforestation. Many endemic plants species gradually disappeared. Wildlife, particularly large mammals, estuarine and tidal habitats have been severely affected by the construction of reservoirs and land reclamation.

Mangroves forest in the country are now reduced and only small patches can be found in the largest area in northern part of the main island and on Pulau Semakau, Pulau Tekong and Pulau Ubin. Animals on top of the food chain do no longer exist. The tropical lowland evergreen rain forest in Singapore still exists in Bukit Timah Nature Reserve.

In spite of its intense industrialization and urbanization Singapore still boast abundant biodiversity. Forest reserves were set up by authorities in order protect the threatened species. There are about 3,000 hectares of Nature Reserves in the country namely -Sungei Buloh Wetland Reserve, Laborador Nature Reserve, Central Catchment Nature Reserve and the highest peak of Singapore the Bukit Timah Nature Reserve.

A wide variety of flora can be found in Singapore. Bukit Timah Nature Reserve and parts of Central Catchment Nature Reserve harbor primary vegetation, thus considered to be significant areas of primary forest left in the country. In Bukit Timah dwells one of the dominant tree families of Dipterocarpacea, tropical hardwoods timber that grows up to 40 meters. Seraya (Shorea curtisii) is considered to the signature tree of coastal hill dipterocarp forest.

Within the northern coastline in Kranji, Sungei Loyang and Sungei Tampines close to Pasir Ris, in patches in Woodlands and Seletar and some other offshore islands are mangrove forest. Sungei Buhol Nature Park and Pasir Risk Park are two of main areas of mangrove forest. Mangroves trees that can be seen along the coast are family of Avicenniaceae such as Api Api Putih, Api Api Ludat and Rhizophora such as Tumu and Bakau Putih. Berembang (Sonneratia caseolaris), a species of tree can only be found in Sungei Seletar and Woodlands it is associated with fireflies and able to tolerate freshwater conditions. Some species of mangrove plants seen in Singapore are plant roots, pneumatophores, mangrove fern (Acrostichum speciosum), mangrove cedar (Xylocarpus moluccensis) and sea putat.

A number of forested areas in Singapore are covered with secondary vegetation that regenerated from areas that were cleared for cultivation. Exotic species connected to Prangipani, Lantana and Boungainvillea are also found in the area. A lot of trees planted by National Parks are imported species such as Angasa (Pterocarpus indicus), Wild Cinnamon (Cinnamomum iners), the Rain Tree (Samanea saman) and the Yellow Flame (Peltophorum pterocarpum).

Singapore has approximately 80 species of mammal, 300 species of bird, 110 reptiles and amphibian species and about 600 freshwater fish species. Most of the animals are restricted to the Natural Reserves and the forested areas such as Pulau Ubin and Pulau Teking.

Animals living along the coast, ponds, reservoirs and streams are dominated by fish, frogs, toads, prawns, and water bugs. There are also species of fresh water crabs in which three are endemic including the Johnson’ Freshwater Crab that roughly measures 3 cm across the carapace. Variety of barnacles, mud-lobster, mud-skippers and snails are also found along the coast.

Surprisingly as it seems but Singapore despite of its rapid urbanization was able to keep and protect its vegetation and diverse wildlife. 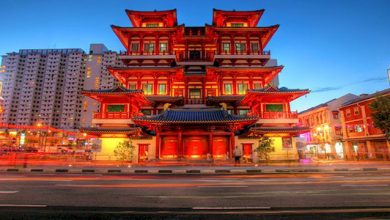