Chinatown is one of the must see places in Singapore. This ethnic neighborhood highlights the unique cultural Chinese elements. This town was conceived by Stamford Raffles based on his Master Town Plan. Sir Raffles felt the need to create a sense of community among people of the same race and culture in order to help them settle down quickly. He envisioned the Chinese people to form the bulk of the future town residents and gave out the whole area west of the Singapore River for a Chinese settlement known as “Chinese Campong” or Chinese Village.

Chinatown is situated at the South Bridge Road. Chinatown is the largest Historic District in Singapore with seven sub-districts in which four of its were given conservation status in the late 1980s – Bukit Pasoh, Kreta Ayer, Telok Ayer and Tanjong Pagar.

Chinatown is full of diverse, colorful, and exciting culture, buzzing with activities that attract not only Chinese but other locals and tourist. Despite the changes occurs some remnants of its vibrant past still stand and old traditions still endure.

Situated in China Town are some of the oldest and the most important temples in the country. The oldest and the most important Hokkien temple in Singapore is theThian Hock Kieng. The temple is known as the temple of the Ma Zu, the goddess of the sea and protector of all seamen. There is also the Sri Mariamman Temple, Singapore’s oldest and largest Hindu temple located at 244 South Bridge Road. This temple was established in 1843. Inspired by the Dravidian style architecture, the entrance is crowned by one of the most sophisticated gopurams (tower of gateway temple) covered floral designs and Hindu deities. Located at Phillip Street of the central area of Chinatown is Wak Hai Cheng Bio Temple. This is the oldest Taoist temple in Singapore, built in the 1850s by Teochew community as a devotion to the goddess of the sea. The temple has a stunningly and ornately carved with various serpent and human figures. The Masid Al Abrar an ancient Tamil Muslim Mosque which is located along Telok Ayer Street, the cental business district of Chinatown. The mosque is also known as Kuchu Palli and Masjid Chulia. Built by the Muslims from Southern India in 1830s, Nagore Durghar Shrine architecture is a unique blend of classical and Indian-Muslim motifs.

Other interesting places to see are the Jinrikisha Station and the Thong Chai Medical Institution in Chinatown. Jinrikisha Station it is one of the most significant historical buildings in the country. Situated between the junction of Neil Road and Tanjong Pagar, this building was built in 1904 to serve as a connector between docks and the town, today it was refurbished as into a shopping and recreational centre. The Thong Chai Medical Institution is the first Chinese organization that offers free medical treatment to everyone. Built in 1892 with its traditional style of southern Chinese architecture, the institute serves as a social center, meeting place and headquarters of Chinese guilds, now the institute was restored and preserved as a national monument.

Chinatown Heritage Centre is another stop; this newly restored museum occupies three shophouses to house memories and untold stories of the early Singaporeans.

Shophouses are everywhere in Chinatown. These shophouses brings back memories of the past. Most of the old shophouses are specialized in age old trades such as calligraphy and clog making, paper effigies of cars as well as tea houses.

Want to taste the authentic Singapore food at very reasonable prices; if so then don’t forget to stop by at Maxwell Market. Located at the heart of Chinatown this food market houses about a 100 food stalls, offering the widest range of local Singapore food at once place. Foods are absolutely luscious and inexpensive.

Kampong Glam is a Muslim and Arab quarter in Singapore. The name was derived from the Malay word “Kampung” meaning village and “gelam” a type of eucalyptus tree which grew in the area and was used for boat-building by the villagers. Kampong Glam can be translated as “Village of Gelam Trees”.

Kampong Glam was used to be fishing village situated at the mouth of Rochor River. In 1819 Sir Stamford Raffles arrived in Singapore and negotiated with Sultan Hussein to use the island as a trading post for British East India Company. In 1822, Raffles allocated Kampong Glam as the settlement area for Malay, Bugis and Arab. Sultan Hussein built a large attap habitation and brought the hundreds of family members to settle in the area.

Kampong Glam reveals the rich heritage of the Malay people. Situated here is the Istana Kampong Glam. Built in 1840 by Tengku Ali son of Sultan Hussein .A typical Palladian architecture, the Istana is a well-designed structured yet understated. The Istana was converted into a Malaya Heritage Centre, showcasing the roots, history and material culture of the Malays in Singapore.

Sultan Mosque is the main attraction of the place. It is the largest mosque in Singapore located at Bussorah St, adjacent to Arab St and Haji Lane. Completed in 1928, the Arabesque style mosque with balustrades, domes and minarets was designed by Denis Santry. One interesting fact about the mosque; its main dome which sits on a black rimmed structure, this rim is made of hundreds of glass bottles.

The Arab Street, this is one ethnic neighborhood in Singapore that surely exemplify the Arabian way of life. The street offers various shophouses selling wide range of authentic Arab goods and food shops where you can savour exotic Middle East cuisines thus gives a Middle East feel. It is the best place to go if you want to buy fabric/ silk. There are also a number of interesting shops that sell baskets, malay clothing as well as country- style furniture.

Other attractions in the area are the Malabar Muslim Jama-ath Mosque, located at the corner of Victoria Street and Jalan Sultan. This mosque was built in a traditional Islamic mosque architectural style and is also known as the Golden Dome Mosque. There is also the Hajjah Fatimah Mosque, a mix Islamic and European architecture mosque. This mosque was named after a woman who donated the land for building this mosque.

Getting There
Take the MRT train to Bugis Station and walk along Victoria Street towards Arab Street.

Little India is one of Singapore’s most vibrant districts and attractive place to see in country diffusing along Serangoon Rd this district exhibit a sanitized version of a real Indian culture.

On the Stamford Raffles plan, the Little India in Chulia Kampong area was originally a division of colonial Singapore where Indian immigrants would dwell under the British policy of ethnic segregation. However, the place become crowed and competition for land escaladed this cause the Indian proprietors and laborers to moved to Seragoon area an attractive place for cattle-breeding due to the abundance of grass and water.

Located in this area is one of the largest wet markets in the city, the Tekka Market. The Buffalo Rd is a bustling area where you can find traditional shops, electronic supply stores and even fortune tellers.

Some interesting temples and mosques can also be found in the area. Sri Veeramakaliamman Temple is one of the oldest temples and most popular Indian temple in Singapore, built by Indian prisoners from Bengal in 1881 as a devotion to the Hindu goddess Kali, fierce embodiment of Shakti and the god Shiva’s wife, Parvati. Along the Dunlop St is Abdul Gaffoor Mosque the original mosque was wooden structured built in 1859, by Shaik Abdul Gafoor Hyder while the present mosque was completed in 1907. The mosque has striking glass cupola which supported by pillars of the Roman. Leon Sang Temple is situated along race Course Rd, this eye-catching is dedicated to the goddess of mercy, Kuan Yin. Temple of 1,000 Lights or the Sakya Muni Buddha Gaya Temple is one of the most important and widely visited temples in Singapore. The temple has a 15 meter Buddha statue that almost fills the temple interior. This statue is surrounded by stylized aura named of colourful lights. Lastly is the Sri Srinivasa Perumal Temple an old Hindu temple of god Vishu. Built in 1855, the temple has a 20 meter tall gopuram while its interior ceiling is dominated by colourful circular pattern depicting the nine planets of the universe.

Getting There
Take the north east line to NE7, little India station, or you can take a SBS bus 64, 65 or 111 from Orchard Rd, alight at Tekka Market along Serangoon Rd.

Known as the cultural heart of the Malay community Geylang Serai allows the visitor to experience and discover the traditional Kampung Days lifestyle of Malays in 50’s and 60’s. Sited in the east Singapore central area, this area was not heavily influenced by large urban redevelopment projects. The district exhibits traditional Malay arts and crafts like batik painting, kite-making, and kampong games.

Geylang Serai is bustling district, day and night. The area is packed of shophouses, eateries, and entertainment venues. Though considered as a legally permitted red district; the area is also boast a scenic surrounding that stands out from the other parts of the country.

The area was developed as a residential suburb for Malays and Ornag Latus (sea gypsies) around the second half of the 19th century after the British evacuated the Malaya floating village around the mouth of the Singapore River.

Geylang Serai Market is a popular wet market in the area. This 40 year old bustling market is one of the best markets to see in Singapore. The newly reopened market offers a collection of items from handicrafts, rugs, fabrics to antiques and furniture. Situated on the ground floor are the market-stalls while on the second floor are retail stores selling clothes, textile, skull caps, Malay CDs and household items. Cooked food stalls are also found in this floor. Here you can find a large concentration of Muslim foodstalls in Singapore and the best place to savor authentic Malay.

The new Geylang Serai Market is spacious and has better ventilation and fire safety features as well as better hygiene standards. The upgraded market is designed to commensurate the ethnic and cultural importance of the site.

Getting There
Take the MRT to Paya Lebar Station (EW8) and walk towards East direction to get to Geylang Serai. 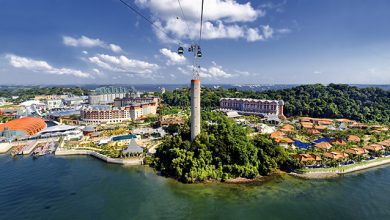 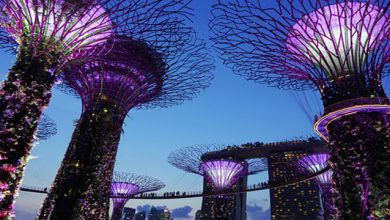 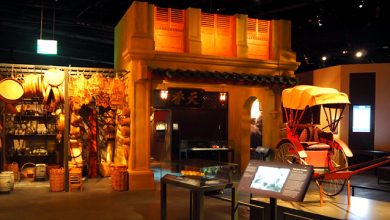 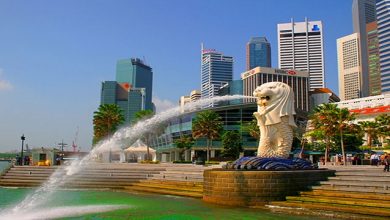