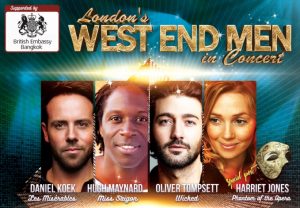 Bangkok (Thailand) – January 11, 2019 (travelindex.com) – London’s West End Men is a concert bringing together some of the best of musical theatre talent to Thailand for the first time. The cast have all played leading roles in mega musicals on the stage in London, and it is very rare that all of them are available to fly to Bangkok to perform on stage at the Thailand Cultural Centre together.

Daniel Koek starred as Jean Valjean in the London production of Les Misérables, Hugh Maynard will be repeating his epic performance as John singing ‘Bui Doi ‘from Miss Saigon as well as songs from the Lion King and Oliver Tompsett who played in Wicked, will be arriving fresh from playing the lead in the Broadway smash hit musical Kinky Boots.

Harriet Jones who played the role of Christine in the Phantom of the Opera for three years in the London production will be a special guest star.

This talented cast will also cover classics from West Side Story, Chess and South Pacific, and the Lion King as well.

It is not often that Asian audiences can experience the magic of the West End right here in Bangkok. To see these stars singing with the Royal Bangkok Symphony Orchestra, will make this a very unique concert at the Thailand Cultural Centre, Ratchadaphisek Road.

IATA: Tax is Not the Answer to Aviation Sustainability