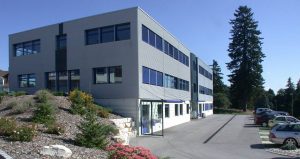 Les Reussilles (Switzerland) – March 14, 2020 (travelindex) – Mechanical movements embody a philosophy testifying both to the history of the first artisans and to the most innovative mechanisms ever invented by humankind. Enter the Newton® movement from Manufacture SOPROD, stemming from three years of development and industrialisation. The first examples have rolled off the production lines, their reliability has been successfully tested and they are ready to be delivered to the renowned Swiss brands who ordered them from us.

Since 2008, SOPROD has been part of the Festina industrial group which, through its various companies, masters the essential components for the complete manufacture of mechanisms from mechanical calibres to quartz connected movements. At the heart of its six Swiss production sites, the entirely independent Manufacture produces all its components including its assortments – escape-wheels, pallets and rollers – as well balances and even balance springs – while its entity in the French Jura region produces mainplates only. SOPROD is thus offering a 100% Jura calibre, at a competitive price, in perfect harmony with the origin of its components. An entry-level industrial ‘engine’, entirely from the Jura and almost exclusively Swiss, that only the Manufacture SOPROD can currently offer and guarantee to Swiss watch brands upholding Swiss Made expertise and values.

A calibre that took several years to develop

The challenge for Jura engineers, watchmakers, developers, movement makers and micro-mechanical engineers was ambitious: to develop, fine-tune, industrially produce and ensure the reliability a new, simple and contemporary mechanical movement. After three years of hard work, the teams at SOPROD have succeeded and the Newton® movement has come of age. It can now be offered to Swiss watch brands looking for a reliable, high-performance, aesthetically pleasing ‘engine’ that can be customised in accordance with each company’s requirements.

The objective set by the owner, Miguel Rodriguez, owner and boss of the Festina Group, was simple to understand, yet not easy to achieve. This new movement had to be of irreproachable quality and reliability, but also meet the requirements of a 100% Swiss Made self-winding calibre. It also had to stand out from the competition and bring real added value to entry-level movement segments, while at the same time offering a contemporary design.

Reliability as the driving force

SOPROD is offering an industrial calibre that is resolutely reliability driven. To guarantee this decisive point in the development of a new ‘engine’ even in the event of shocks or vibrations, Newton® has the best shock absorber, the double-cone Incabloc®, while the cross-through bridge provides increased protection for the balance itself. Finally, to provide ultimate confirmation of its dependability, this Newton® movement has been tested by the Dubois Laboratory and earned the Chronofiable® Certificate, involving a battery of tests covering accelerated ageing cycles, shocks of all kinds and resistance to magnetic fields.

An intrinsic design, yet fully adaptable as the client chooses

The design of the bridges was to be particularly pared-back, in order to create a contemporary overall look. Contrary to competing calibres, the aim was to magnify the balance, ensuring 360° visibility. This aesthetic choice implied aiming for a movement that is as symmetrical as possible along the 6 o’clock-12 o’clock axis. To ensure that the heart of the movement takes pride of place, the balance is elegantly positioned at 6 o’clock, an infinite source of inspiration for brands that will opt to create «Open Heart» models.

SOPROD, the independent Manufacture that makes its own movements from A to Z

Representing a rare phenomenon among Swiss movement manufac- turers, SOPROD is also totally independent in terms of its sourcing of assortments (escape-wheels, pallets and rollers), balances and balance springs – to mention only the most sensitive elements. These are manufactured by MSE (Manufacture de spiraux et d’échappements), an entity of the group, based in Muriaux in the Franches-Montagnes. Thanks to the high quality of its components, the SOPROD collection of M100 movements and variations achieves a success rate of 90 to 95% at first attempt in the chronometer certification process.

SOPROD, the alternative Swiss movement Manufacture that is establishing itself

Since 1966, SOPROD SA has been developing and manufacturing mechanical, quartz and connected (via smartphone) movements featuring high added value, reliability and performance. A key player in the world of Swiss Made movements, SOPROD has many customers, most of them from renowned Swiss watch Maisons. The Manufacture has six production sites in Switzerland and one in the French Jura. Those in the Jura region handle the mechanical movement segment, while connected quartz movements are designed and developed in Sion (Canton of Valais.) Since 2008, SOPROD has belonged to the Festina industrial group which, through its various companies, masters the components essential to A to Z movement production, making it a 100% independent Manufacture. In Muriaux in the Jura, MSE (Manufacture de spiraux et d’échappements) produces the assortments (es- cape-wheels, pallets and rollers), along with balances and balance springs. At the six other sites, SOPROD manufactures all the other components: plates, bridges, pinions, screws, ball bearings, etc. SOPROD has its own collection of calibres: M100 and now Newton®. These lines naturally comply with the sizes of standard Swiss movements, which are constantly being enlarged due to the development of horological complications.