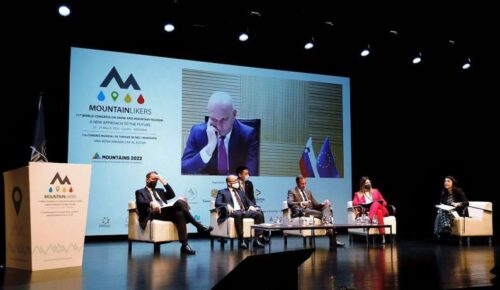 Andorra la Vella, Andorra, March 30, 2022 / TRAVELINDEX / The UNWTO 11th World Congress on Snow and Mountain Tourism was held 23-25 March in Andorra, and was celebrated onsite by over 400 attendees from 13 countries. The hybrid event was re-convened after a two-year delay due to the pandemic.

Andorra-la-Vella Congress Center at the heart of the historical district of the capital hosted the event. In time, bright sunshine broke the gloomy weather, and the spring flowers beckoned to welcome international guests.

The Minister of Tourism and Telecommunications of Andorra, H.E. Mr. Jordi Torres Falcó opened the Congress by stating Andorra’s strong position in preserving natural resources: “We cannot dissociate snow and mountain tourism from the preservation of resources and sustainability.”

He shared the many challenges faced by Andorra, including seasonality and the efforts in expanding the tourism offerings beyond the winter season. In his closing remarks, he was pleased the event covered key issues that would shape the future of mountain tourism. He considered the Congress’ objectives achieved, and the industry generated synergy for moving forward. With better industry efforts and improvements, he sincerely welcomed broader markets and all tourists to visit Andorra.

Describing the general context of the three “major crises” faced by the sector—Covid-19, climate change, and the war in Ukraine—Zurab Pololikashvili, Secretary-General of UNWTO stated, “at the World Congress on Snow and Mountain Tourism, we can show the world that tourism is united, and that our sector can offer answers and generate the confidence that we all need in such difficult times.”

He appraised Andorra as an example of developing into a year-round destination through more offerings such as other sports, gastronomy, and music. For the next Congress, he suggested adding a new theme of health, wellness, and spa. He referred to the ministers’ visit to a village in a parish, Ordino, and amplified the significance of “Best Tourism Villages” worldwide in facilitating and achieving the SDGs. Mountain tourism is associated with mountain villages and communities, and the “Best Tourism Village” induction provides a mechanism to guide villages to better achieve the SDGs.

The ministers on stage addressed climate change and how to adapt to it, seasonality of mountain tourism, community engagement, and how to offer authentic and quality products, boost country image and tourists’ perceptions, social and economic impact, sustainability, and more. The session was moderated by the head of Tourism Market Intelligence and Competitiveness of the UNWTO, Sandra Carvao.

Carvao and Rosalaura Romeo, coordinator of FAO’s Mountain Alliance projects jointly presented the key outcomes of the report Mountain tourism- Towards a more sustainable path, which was developed within the framework of the U.N. International Year of Sustainable Mountain Development. The first part of the report was released in December 2021 (Mountain tourism – towards a more sustainable path (fao.org)). Ms. Carvao also shared several case studies, which highlighted food tourism, nature-based tourism, innovation and digitalization, and governance models and policies, etc.

Andorra has seven parishes, and Canillo is the host parish for the 11th edition of the Congress. At the closing ceremony, H.E. Mr. Francesc Camp Torres, Mayor of Canillo, stated that the conference fulfilled its role by providing new ideas, perspectives, and best practices for the Andorran industry to listen and to learn from. Big data applications and other technology developments were well shared, and the next step should be for the industry to take action and to implement them. He advocated the changes and stated that a destination could not grow unless changes were to be made.

Discussions were dedicated to technology and gastronomy, including the digital transformation and how big data, artificial intelligence, and virtual innovation have been allies to adapt to the new future; and how to use gastronomy as a practical platform to engage the local community and to contribute to increasing year-round tourism and developing authentic experiences. Four official languages were used during the Congress: English, Spanish, French and Catalan. The sessions will soon be made available online and will be played alternately in the floor language.

Haybina is an international travel industry reporter and has been reporting in both Chinese and English. Linkedin

SETA is Back with Professional Host and MC Able Wanamakok